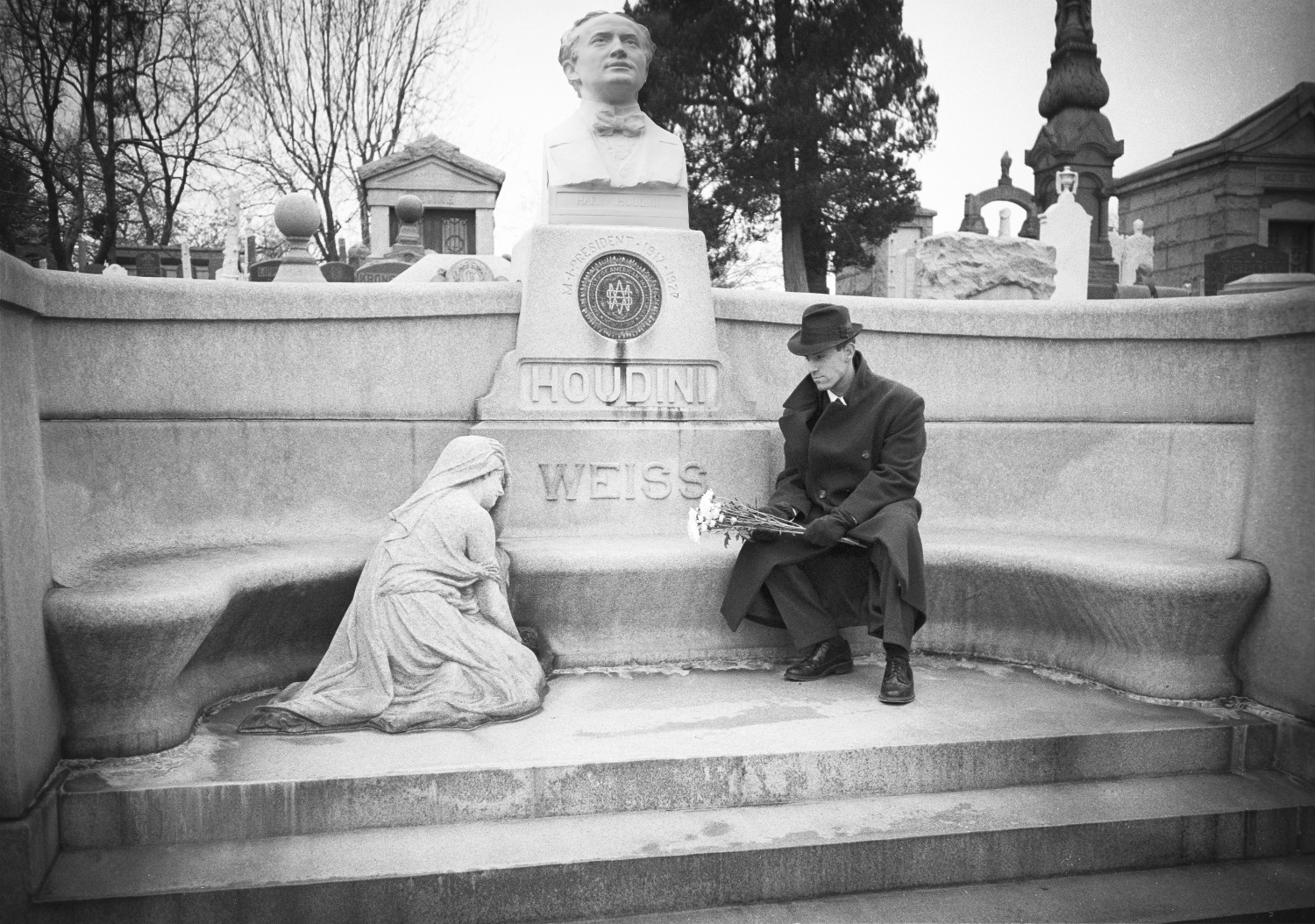 The call came well after midnight – by this time Monday, October 25th.  Young Dr. Daniel Cohn calling from The Statler Hotel.  Not their usual man, and in my opinion a bit too excited for this late hour – he told me of his famous patient, the entertainer known to the world as Houdini.  I’d read in the evening paper before retiring that Mr. Houdini had arrived in Detroit to open his run at the Garrick yesterday, and that the magician was somewhat off the mark for his performance.  Well, Cohn’s diagnosis of appendicitis would perhaps explain some clumsy conjuring on Mr. Houdini’s part.  I was to meet them at the Statler, as Houdini could not be convinced to admit himself to Grace Hospital.  Appendicitis, unless peritonitis had ensued, I could readily cure - especially in a man as strong as Mr. Houdini.  And yet by my estimation he must be at least fifty by now.  But if he were to do poorly - well let us not think about that.

Dressing quickly, I arrived at the Statler by three in the AM to make Mr. Houdini’s acquaintance.  His face I recognized instantly, familiar as it must be to every man, woman, and child in America (and likely the world) from posters featuring his dare-devil escapes, his moving pictures, and the recent newspaper coverage of his attacks on fraudulent spiritualists.  Clearly ill, his nightshirt was widely open at the neck and soaked with perspiration.  Shaking with rigors, he managed to overcome his distress for the moment of our introduction – even attempted to rise and shake my hand – humbly apologizing when he could not.  A gentleman through and through.

The history was perplexing.  A student in Montreal had tested Houdini’s said abdominal strength with a series of blows to the lower abdomen some seventy-two hours before.  Houdini explained that he was at the time reclining, nursing an ankle fracture suffered in Albany from a cable malfunction while performing his famous Water Torture escape, and wasn’t prepared for the suddenness of the student’s attack.  Confusing things further was the claim from Mrs. Houdini’s nurse (who had been traveling with them, tending to her ptomaine poisoning) that Houdini had been complaining of abdominal pains well prior to the blows.

Examining my patient, his temperature was 103 degrees, his pulse bounded at 130, and his abdomen, remarkably trim for a man his age, showed the board-like rigidity of late peritonitis.  But what diagnosis?  Cohn insisted on appendicitis – ruptured from the student’s blows.  Possible, but certainly not in line with the understood pathophysiology of inflammation and rupture by obstruction of that organ's lumen – by fecolith, or lymphatic hypertrophy, or from the Devil’s own finger!  But from the trauma of a fisted blow?  I’d never read in any text or journal of such a thing.  More likely the cecum would burst in accordance with Laplace’s law (I had seen this once), or a mesenteric rent and hematoma resulting in ischemia of the small bowel.  Regardless, one thing was clear: only a successful operation could save this man.

Yet Mr. Houdini, pleasant and respectful of my opinion as he was, insisted that we first contact his man in New York, a Dr. William Stone.  When finally reached, Stone’s sleepy response was sensible enough: he told Houdini in no uncertain terms of what awaited him if there was any further delay.  Yet the ambulance I called for was refused, and Houdini didn't arrive by cab at Grace until sometime after four in the AM.  I was embarrassed to learn there was only a double occupancy room available for him, and ordered the head nurse correct this situation by whatever means necessary.  Overhearing our ruckus, Mr. Houdini interrupted and with a smile insisted that the double room would do for him.

There are those who suspect Houdini of possessing supernatural powers – perhaps even the secret of dematerialization.  Seeing him perform as a boy, these popular ideas indeed took hold in my own imagination, germinating over the last twenty or so years to unnervingly resurface at the most inopportune moment as my scalpel hovered over his abdomen.  Silly of me, for the thin trail of bright capillary blood that next appeared in the blade’s wake, and the copious purulence that spilt from the opened peritoneal cavity assured me in an instant just how mortal was the man lying before me.  I opted for a midline incision instead of McBurney’s due to the diagnostic uncertainty.  Exploring, I found the tissues markedly inflamed, adherent, and edematous from a process well advanced.  With some difficulty I discovered the appendix – a great long affair beginning where expected in the right pelvis but looping across the midline into the left lower quadrant, where it was indeed perforated.  While closing the abdomen, I mentally prepared a statement for the waiting reporters – appropriately grave but not altogether devoid of hope.  My countenance before brother Theo (professional name Hardeen) betrayed this attempt at optimism, and so I confessed to him my belief that Mr. Houdini would not recover.

The following day LeFevre had been called in, prescribing some homeopathic concoction of his invention.  I wasn’t pleased to learn of it, but honestly there was little that could worsen the prognosis of advanced peritonitis.  And yet, whether from some efficacy of LeFevre’s serum, or more likely from removal of the septic appendix, the temperature did diminish to 99.4 degrees, and the pulse to 100.  Houdini remained remarkably alert for the next two days, during which my fondness for the man grew large.  No attendant so much as mopped his brow or brought a sip of water without recieving from Houdini a smile and expression of thanks.  Hundreds of telegrams, letters, and bouquets arrived.  Also another brother Nathan and sister Gladys.  Mrs. Houdini remained unwell, slow to recover from her poisoning and now the added strain of her husband’s illness.  A curious woman, we wheeled her to the bedside only for short visits.

Cohn and I took shifts attending to our patient until I discovered him feeding Mr. Houdini something they called Farmer’s Chop Suey – Houdini had a yen for it and Cohn dutifully fetched some from the deli across the street.  The fool!  From then on I stayed at the bedside always.  When Houdini wished to converse, it was mostly about magic or spiritualism or other philosophical concerns.  I confessed that as a boy, I had (as probably did every youngster who ever saw him perform) dabbled with the idea of following in his footsteps.  Amused, he reciprocated a deep admiration for the medical profession – said he’d always wished to be a surgeon, to actually help people.  When I protested, reminding him of the thrills he had brought to countless persons around the globe and referred to myself as an ordinary dub of a surgeon struggling on through life – he would have nothing of it.

By Friday he was again quite ill.  Ileus had prevented all but minimal hydration, but now even the gastric secretions were being regurgitated with regularity.  I contemplated the wisdom of another surgery; already there was laudable pus from the wound, but perhaps there was another injury suffered from the blows that I missed at the initial exploration, or an abscess in need of drainage, or an obstruction to be lysed.  I knew I’d be chastised – by my mentors and by strangers alike.  But for those of us who were there, the most famous man in the world dying before our eyes, we felt that tending to some correctable problem in the abdomen was his only chance.  Informing Houdini of my recommendation, he deferentially agreed: “You are the doctor, go ahead.”  Yes, I am the doctor I thought – but the words had the sting I recalled from the day I was first addressed as such by my great mentor – myself just a hapless intern at the time and without the faintest idea of what to do next for the injured patient before us.  Leaving room 401 for the operating theater, he took Mrs. Houdini’s hand and told her to be prepared if anything happens.  It was the only time he’d acknowledged some inkling of his doom.

More pus.  As is written in every surgical text, this time frame is quite impossible and frankly dangerous for re-operation – the tissues thickened, adherent and friable, more likely to create worse problems than to solve any.   But I assured myself there was at least no fecal contamination - and performed the best irrigation of the cavity I could achieve.  Regardless of what my critics would say, I would sleep knowing that I had done all that I could for my patient.

By noon Saturday it seemed it would be only a matter of hours, but his strength saved him through another night.  Quite delirious by morning and with markedly labored respirations, he managed a lucid moment to turn to brother Theo (Houdini called him Dash) to say that he couldn’t fight anymore.  It was incongruous that a career made of defying death would end here in my little hospital in so ordinary a manner, of streptococcal peritonitis.  Ashamed of the tears I felt running down my eyes, I excused myself from the family and left the room, only to be called back less than an hour later - moments before the time of death, 1:26 PM October 31st, 1926.  Mrs. Houdini was in his arms.

As I expected, the newspapers for a time had their way with me.  Friends were even kind enough to mail clippings from the more sensationalist New York papers.  From the Evening Graphic: “Death was caused by surgical gauging and overtreatment.”  Don’t know if the overtreatment was LeFevre’s serum or Farmer’s Chop Suey, but the gauging - I guess that would be me.  Others called Houdini’s death “an unpunished crime” and demanded an investigation.  That I knew better made the situation no easier for me; at the time I was quite a young surgeon and Houdini had been my boyhood hero – surpassing in my esteem even the great Ty Cobb.  I took some days leave from my clinical duties, wallowing in that graveyard each of us who have entered this calling of surgery tends for himself and visits from time to time after certain of our failures.  But during my last night away I received a most remarkable and restorative visit - one without secret code or the medium’s tambourines and trumpets.  And in retrospect, perhaps it was I who needed to hear from him most - more than the séance crowd that still gathers each Halloween eve – so that I may set things right in my head and in my heart, and carry on with my own life’s work. 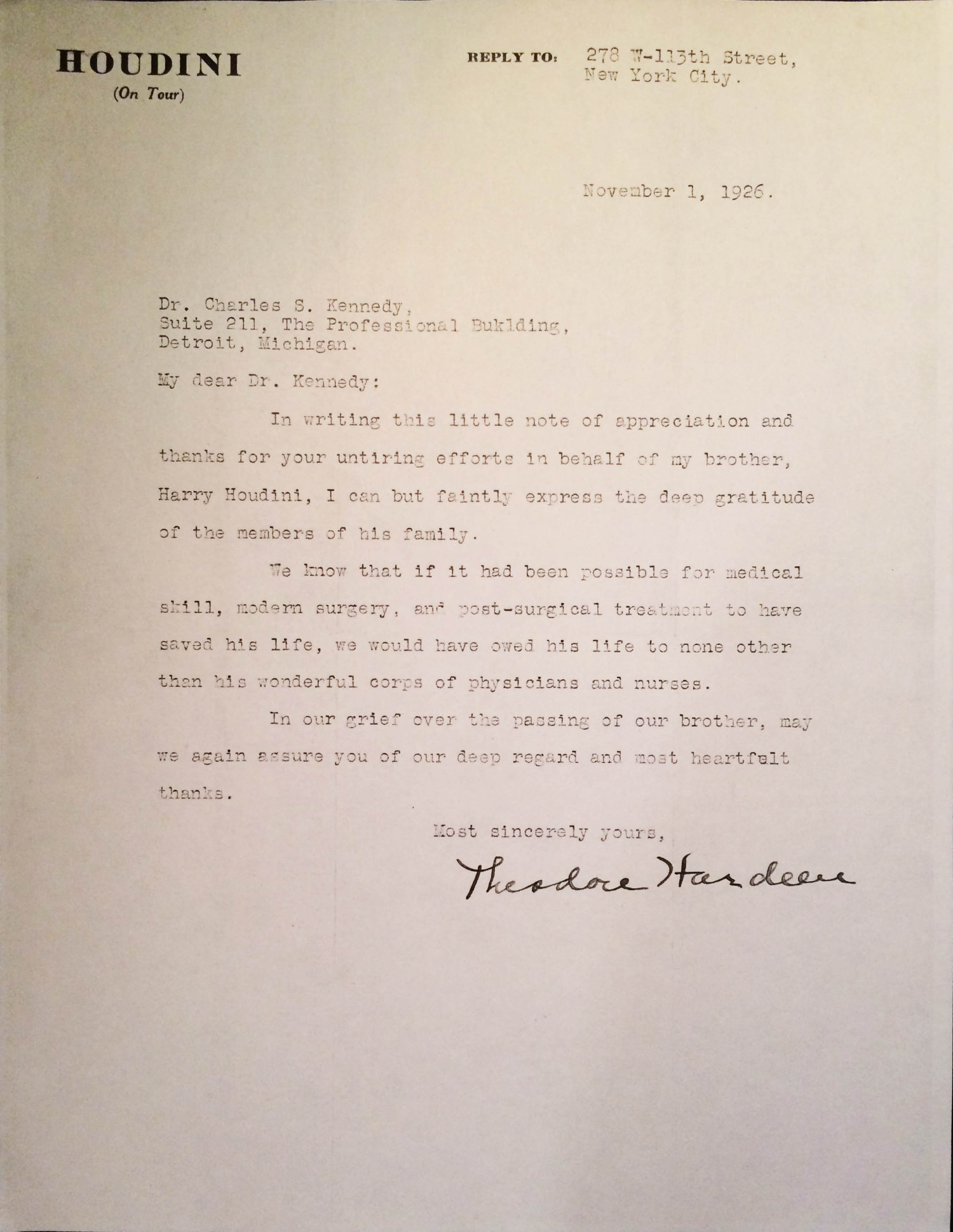